This section offers an overview of what TADS is, what it does, and how you can use it to create your own IF. Note that this is just the marketing literature, not a tutorial. For actual documentation, please see the Manuals page.

If you just want to play a TADS game (and you're not thinking about writing your own IF), you don't have to know much about TADS. All you need is a TADS Player Kit (also known as an Interpreter) for your system. Once that's installed, just launch it and select the game to play.
Download a Player Kit now »

TADS approaches IF authoring from a programmer's perspective. When we designed TADS, we started by asking why it's so difficult to write IF with a mainstream language like C++ or Javascript. We applied the answers we found to the design of a new language. The result looks a lot like C++ and Javascript, but has many differences, small and large, that make it better suited for IF.

TADS will probably appeal to you most if you're already comfortable with other software development tools, and you think of IF authoring as a coding project. The language has the same mathematical precision as other C-like languages, the same economy of syntax, and the same fussiness about semicolons. The TADS tools are organized along the same lines as mainstream programming tools, to make programmers feel at home and give them the degree of control they expect. But they're also designed to be friendly to non-programmers - especially on Windows, where TADS Workbench brings the whole tool set into an integrated, menu-driven environment that has everything you need to write your game start to finish. 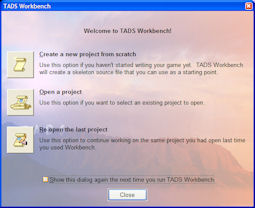 Read on for more details on various aspects of the system.

Games - the sorts of games TADS can produce

Web Play - another type of game TADS can make

Language - overview of the programming language

Tools - information on the TADS tools

Versions - choosing between TADS 2 and TADS 3

TADS is free software, with published source code. It has no ads, upgrade pitches, or other catches. TADS places no restrictions on the games you create with it; you're free to give them away, distribute them as shareware, sell them commercially, or do anything else you want with them. The TADS interpreter can be freely redistributed with your game, even if you publish your game commercially.